Seasoned by the Tourney 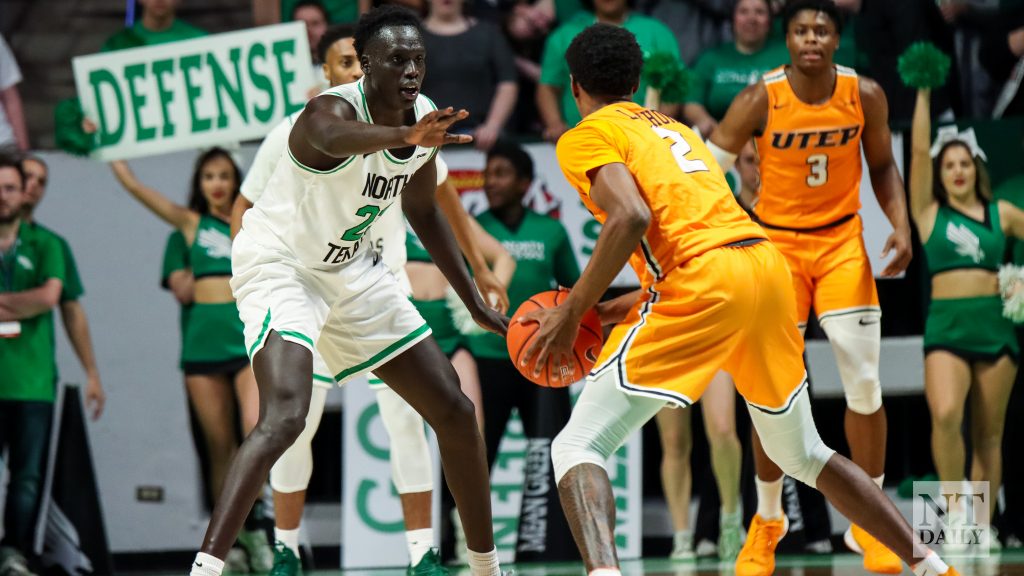 In a matchup of two of the top teams...
Read more
Sports

Softball hosts Conference USA tournament with No. 2 seed in hand

As the regular season drew to a close with...
Read more
Sports

With the men’s basketball team, junior guard James Reese and graduate forward Deng Geu both came into the season as starting-caliber players and are known for their work on the defensive end. However, the biggest thing they share is their history of playing in the NCAA Tournament, something North Texas has not competed in since the 2011 season.

“They have experience as far as getting to the tournament and we can use that,” redshirt sophomore guard Umoja Gibson said. “Just knowing we got two guys that have already made the tournament is a huge plus for us.”

Reese’s last experience was during his freshman year at Buffalo, where the No. 13 Bulls upset the No. 4 seeded Arizona Wildcats 89-68 in the first round of the 2018 NCAA tournament. The Wildcats roster featured Deandre Ayton, who was later drafted No. 1 overall to the Phoenix Suns in the 2018 NBA Draft.

Despite Buffalo’s historic upset win against Arizona, they lost in the next round to the No. 5 seeded Kentucky Wildcats.

Reese played two minutes total during the tournament, but he described it as an exciting experience.

“It was fun. Everybody was calling my phone telling me ‘you messed my bracket up’ which was kind of cool,” Reese said. “That’s the biggest thing I remember from the tournament.”

As for Geu, he played on the No. 16 seeded North Dakota State team that went into the opening round of the 2019 NCAA  Tournament playing the No.1 seeded Duke Blue Devils. Geu recorded six points and three rebounds in 19 minutes of play and was tasked with stopping Zion Williamson, the 2019 NBA No. 1 overall pick of the New Orleans Pelicans.

Geu thought it was a completely different experience than what he’s seen in the regular season.

“There are so many eyes on you, including the media,” Geu said. “There’s that whole experience even before you step on the court for the game, and then obviously playing Duke I felt like the whole world was watching and that gym was rocking. Just growing up dreaming about it and then just being put on that stage is a crazy experience.”

With North Texas being the top-ranked team in conference (16-9, 10-2 Conference USA) and two games remaining in the regular season, their placement in the conference standings has them favorited to represent C-USA in the NCAA Tournament. However, despite their ranking in conference, the team refuses to become complacent with their play.

“There’s a lot of season left and you can’t feel like you’ve already made it because at the end of the day we haven’t really reached our goal which is to win the conference championship,” Geu said. “It was a couple months ago where we were losing a lot of games. We just have to remember how we felt in those moments and just keep working until we get that goal.”

North Texas is tied for 12th in the nation among shooting teams and is off to its best start in conference play in program history.

“It feels the same as the year I went [with Buffalo]. We just keep getting better and we’re not even 100 percent yet,” Reese said. “I can see us doing a lot of great things. We just keep turning it up and staying focused while listening to our coaches.”

The 20010-11 team, which was led by former head coach Johnny Jones, beat Troy 66-63 in the 2010 Sun Belt Conference Tournament finals. North Texas earned a No. 15 seed in the NCAA Tournament where they faced No. 2 seeded Kansas State in Oklahoma City’s Ford Center. The team lost 82-62 and has been in a 10-year drought ever since.

Being on a tournament team and knowing what it takes to get there, both Geu and Reese hope they can pass it along to the rest of the team and make a run in the NCAA Tournament.

“That’s what we came here for … to get to the tournament and make history,” Reese said. “So to be able to do that with my teammates would mean everything to me. The goal is to get there and make history at North Texas, and that’s what we all want and I don’t see why it can’t happen.”

Featured Image: Forward Deng Geu gets in a defensive stance against UTEP opponent on Jan. 25, 2020. Image by Zachary Thomas