With the cost of living on the rise, more...
Read more
Government

Bright lights and Spanish music sets the mood as attendees begin to file into the Lyceum. Backstage the dancers are huddled together in a circle, one of the members giving a pep talk to the group before their showcase begins.

Melodie Hernandez, the president of Folklorico de North Texas, walks to the center of the stage where she welcomes the crowd. Shortly after, the lights turn off.

Dressed in vibrant colored dresses with ribbon woven through the fabric, the first group of dancers take the stage to perform “Son de la Negra,” a song and dance representing the Mexican region of Jalisco.

“[The showcase] wouldn’t have been possible without the communication that we have as officers and us being able to talk to each other and understand each other from different perspectives,” Hernandez said.

Folklorico de North Texas, a group focused on traditional Mexican dance, is the first of its kind to be established at UNT. The organization’s showcase on April 26 marked the group’s one year anniversary. 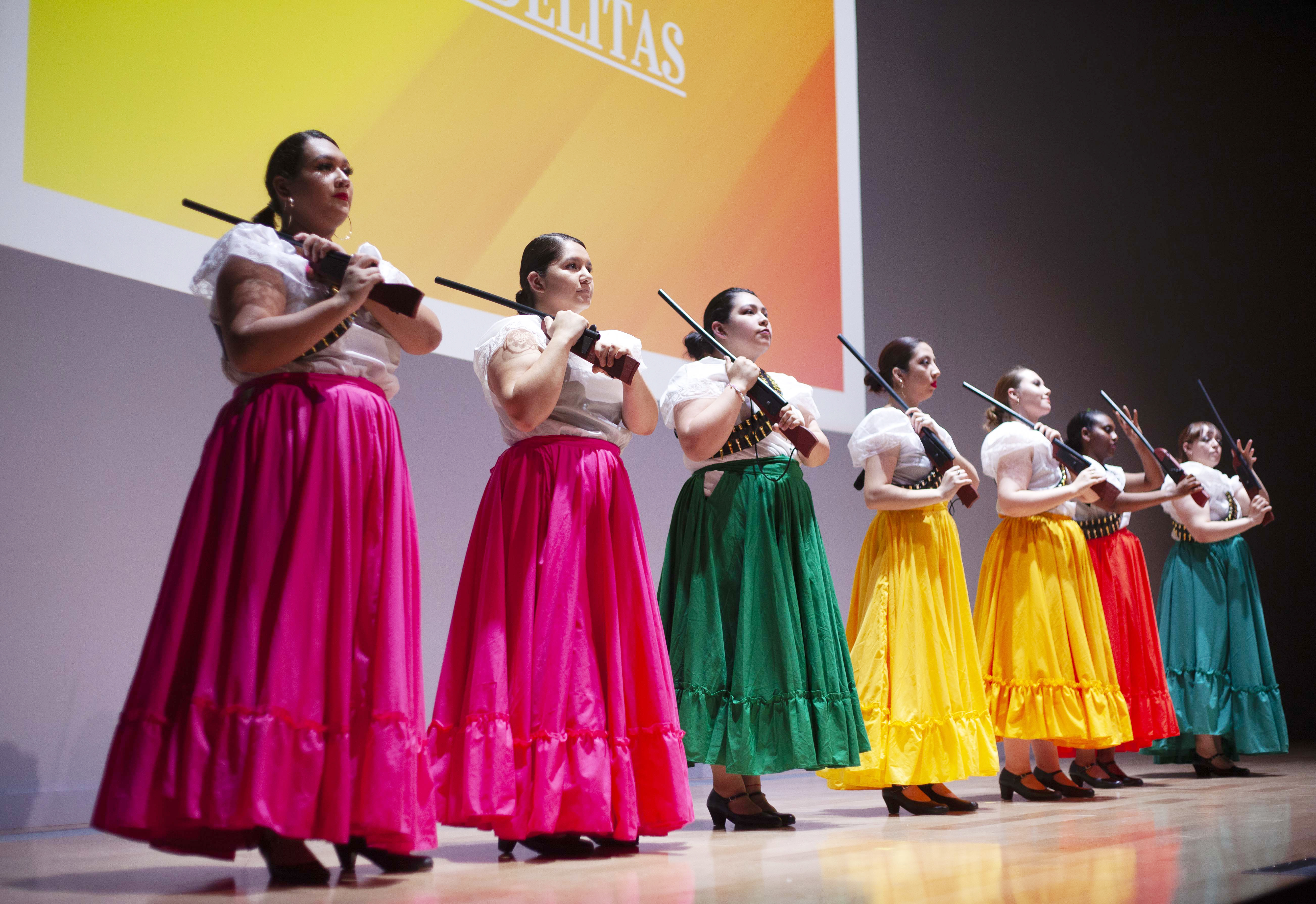 Members of Folklorico de North Texas perform ‘Las Adelitas’, a song paying homage to the women who fought during the Mexican revolution. Image by: Isabel Anes.

Despite having a quick run-through an hour and a half before showtime and concern if there were enough dresses for each of the dancers, members said the stress and hard work leading up to it was rewarding in the end. For those in the organization, the planning and finalizing the showcase went deeper than just the surface level. It required many hours of diving into technical work such as lighting, music and costume changes.

Members dressed in a white shirt and colorful skirts carrying wooden guns with a vest of bullets around them marched onto the stage. “Las Adelitas” began to play while the dancers paid homage to the woman who fought during the Mexican revolution.

FNT is a group that is still growing. This year, the group faced low funding and a lack of resources for their practices and performances. However, the past four months for the group has resulted in growth in the group’s social media followings, allowing them to pair up with other Latinx groups on campus.

Anthropology freshman Alejandra Balbuena manages the public relations for the organization. Balbuena said she believes that not only does the group represent the Latinx population at UNT but is also revolutionary in its own sense.

“We’re marking a new era on campus,” Balbuena said. “It’s bringing people like us together, for us not to be a number and a demographic. We’re doing this so that we can find each other.”

After an intermission, a video played for the attendees upon their arrival back. Several pictures of the group from their first year together played on the screen and towards the end, videos of the members stating what FNT means to the them. A majority of the members all said the same thing: Community. 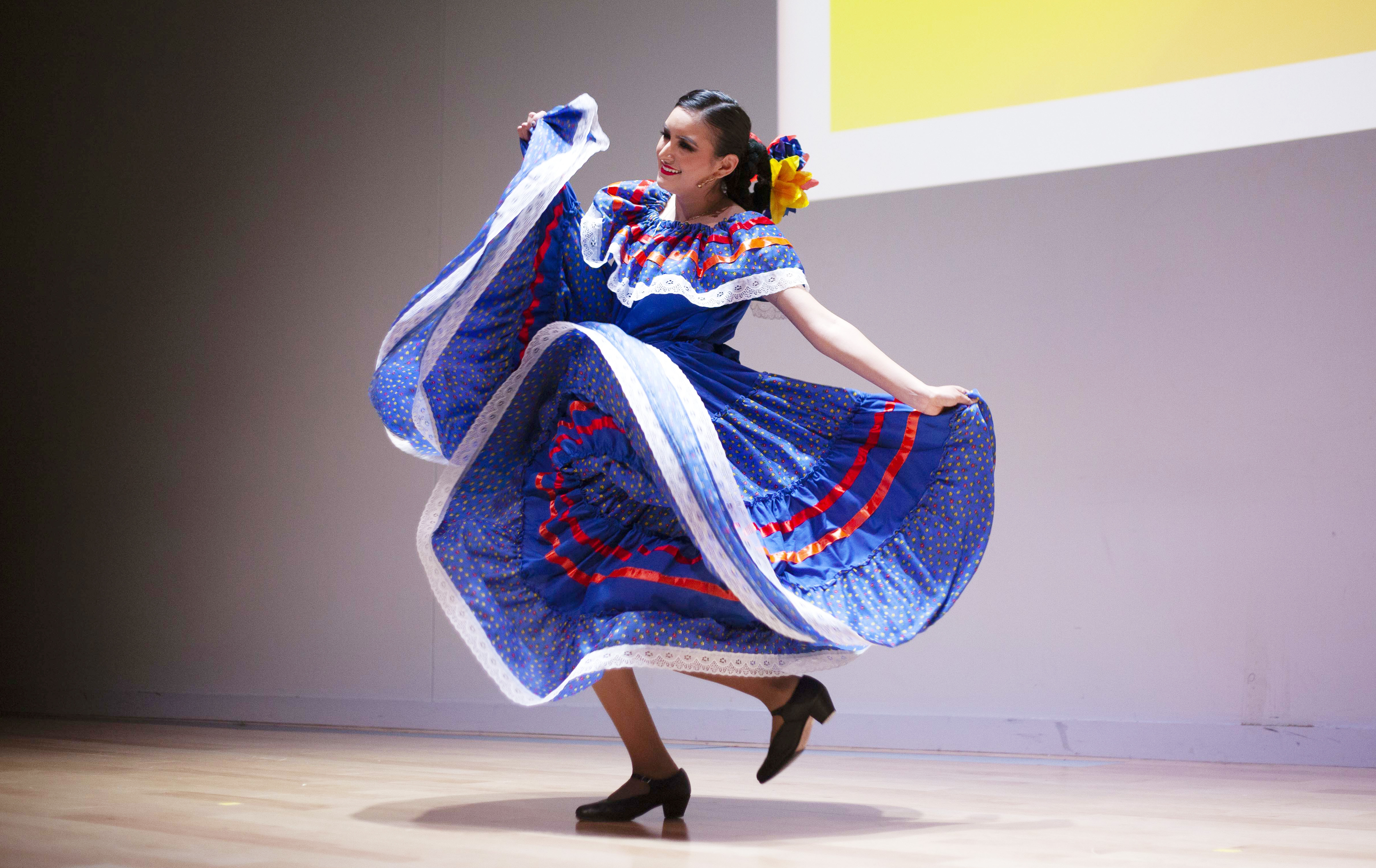 Political science and history sophomore Harlie Montez, a member of the organization, does not dance for the group but still attends every practice and rehearsal to cheers the others on. Montez said she had never been able to find a group at UNT where she was welcomed with open arms.

“I’ve never met a group of people that made me feel so warm and welcome,” Montez said.

Starting with “La Bamba” and ending with “La Llorona,” FNT represented the region of Veracruz in both the solid white lace dresses and  in the complex footwork the region is known for.

For converged broadcast media senior Joshua Price, an attendee of the event, the event was an “amazing experience.” The dancing done during the Veracruz region was his favorite because of the many influences in the dances, along with the beat of the music. Price said he believes the organization is a place where members of the community can feel welcome.

“I think it brings just a place for belonging,” Price said. “I think there’s a lot of people who try to find their place on campus and this can definitely fill it.”

Ending the show with more of a modern twist, the group choreographed performances to “Poco Loco” and “Recuerdame,” songs that come from Disney Pixar’s “Coco.”

Moving forward, members are looking to be a representation of Latinx culture both on and off campus. The group plans to showcase Folklorico in the art gallery in the Union, sharing the entire meaning and process of the art form with those at UNT. Along with this, they recently partnered up with Lake Dallas Elementary School, where they will help teach Folklorico to the students attending.

Featured Image: Folklorico de North Texas had their showcase on April 26, marking their one year anniversary since the organization was established. Image by: Isabel Anes.