Lora O’Shaughnessy’s collection of art is a mix of what she calls “cute and spooky.” This is reflected in her work from a pink and purple Furby-inspired plushie to a doll wearing a letterman jacket from the ’50s horror film “I was a Teenage Werewolf.”

In 2017, O’Shaughnessy established Egan Street Design, named after the street she lived on. The business began as a hobby but has now become a full-time job for her, with her online shop boasting a wide range of plushie designs. O’Shaughnessy said she enjoys trying out different things with her art, whether it be experimenting with fur types or different colors. 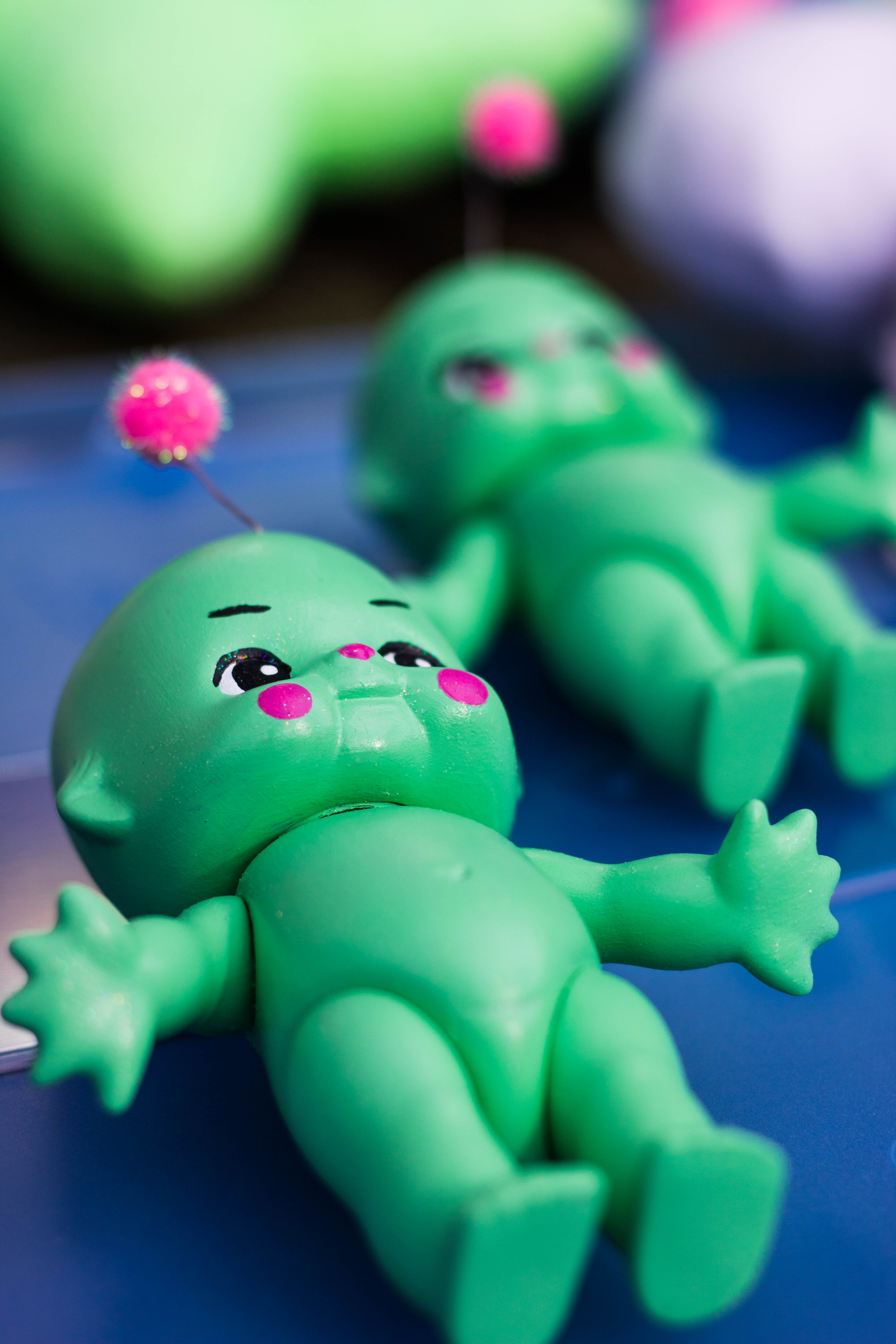 Some of O’Shaughnessy’s creations for her online business, Egan Street Design. O’Shaughnessy holds workshops for others to create their own whimsical creatures. Image by: Paige Bruneman.

“[There are] all these different techniques of coloring [plushies,] spray painting them and dyeing the fur that you don’t see a lot of in other art forms,” O’Shaughnessy said. “That has definitely inspired me recently.”

O’Shaughnessy said she was initially inspired to start Egan Street Design after getting involved in Denton’s maker community. She said at first, she did not consider art as a career but seeing people create for a living made me her realize she could, too.

“Everybody is encouraging each other and you can bounce ideas off people and you never know where you’ll get inspired or who you’ll meet that will be an encouragement to you,” O’Shaughnessy’s close friend and Denton resident Kara Herman said. “I think there’s something super special about Denton and all the creatives here.”

O’Shaughnessy began part of her business with her Etsy shop. One of her recent custom orders, requested by a friend, is for a version of the character Kiki from “Kiki’s Delivery Service.”

“Kiki has brown hair but I wanted to go with a lighter color because I wanted the features to show up,” O’Shaughnessy said. “[The] movie came out the day in Europe I was born so I have a special connection.”

“I love seeing what people come up with,” O’Shaughnessy said. “It’s so much fun because they come up with things I didn’t even think of. Sometimes I have bits and bogs that I didn’t end up using but I made. Those get utilized in ways I couldn’t even imagine.”

O’Shaughnessy said she hopes to do more events like this in the future.

“Somebody can show up who has zero craft experience and we have to teach them everything, and some people show up that have a little bit of experience,” Herman said. “It’ll be a good opportunity to teach them, have fun and learn from them as well.”

Over time, O’Shaughnessy has been trying to become more brand-aware. 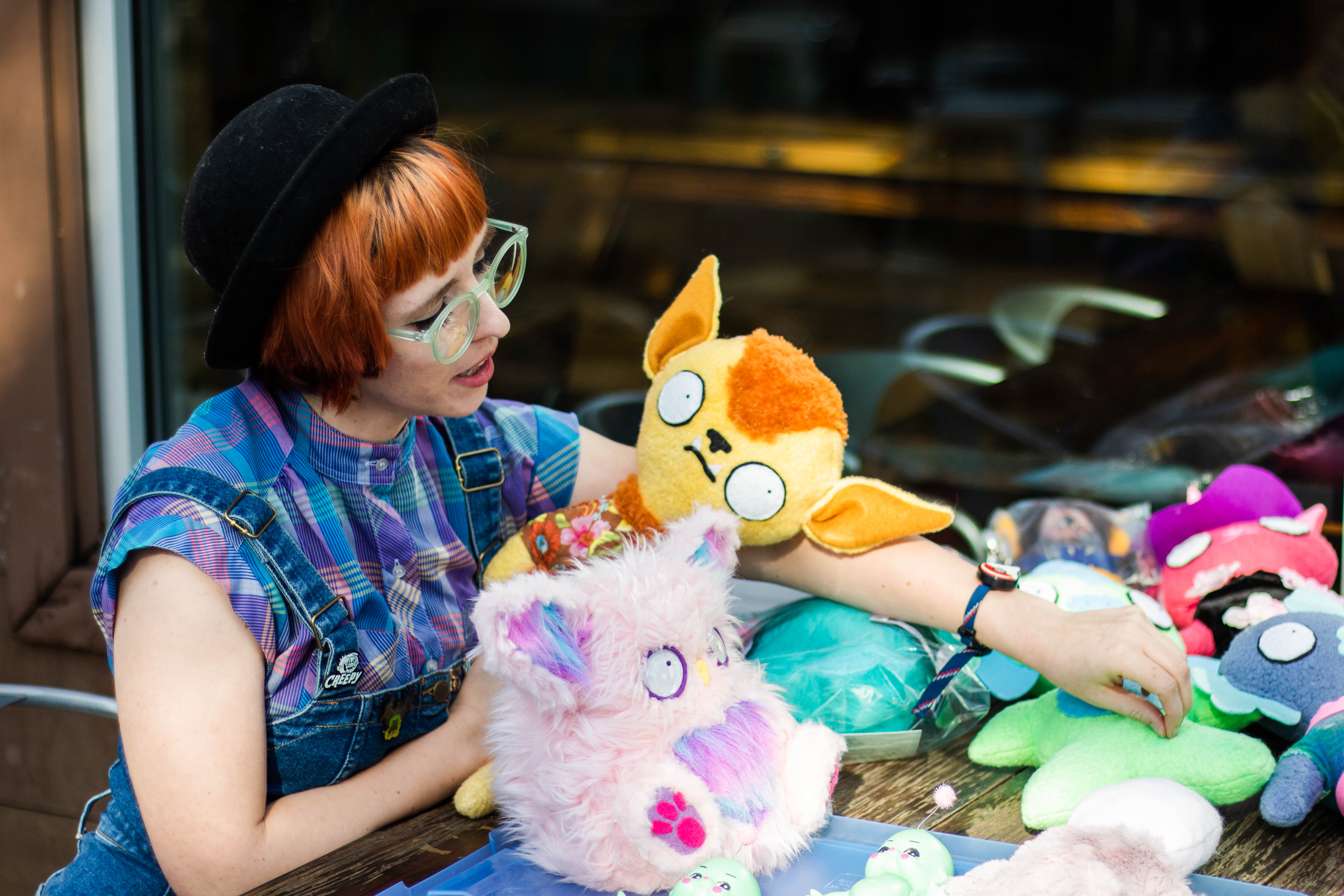 Lora O’Shaughnessy shows off some of her creations for her online business, Egan Street Design. O’Shaughnessy has a passion for creating whimsical creatures, which she sells on Etsy. Image by: Paige Bruneman

“Marketing is hard just because it’s kind of like that scene in ‘Beetlejuice’ where he’s pretending to be the car salesman,” O’ Shaughnessy said. “He’s like, ‘I’ll chew on a dog.’ That’s what I feel like online most of the time.”

O’Shaughnessy also enjoys looking at data and analyzing the engagement information she has access to from Etsy and Instagram. While she enjoys the artsier side of Egan Street Design, she also enjoys trying to figure out where the sale came from.

“I like to have tangible evidence of whether what I’m doing is working or not,” O’Shaughnessy said. “That’s really kind of the only way and sometimes it’s not the best. Sometimes it takes a long time for your Etsy listing bots to go through and get it all in the search.”

Kimberly Bien is another friend of O’Shaughnessy’s and the owner of Salted Sanctuary Soap. She met O’Shaughnessy when she was a vendor at the Denton Community Market and said she can see herself working with O’Shaughnessy.

“What I do with my art is I have an apothecary store,” Bien said. “ I would love to collaborate with her on a nature-inspired creature.”

Aside from the art community aspect, Herman said working together with O’Shaughnessy makes for a productive relationship that not only creates friendship but also new ideas.

“We kind of work together in the ways of helping promote each other, doing shows together and meeting up for coffee and brainstorming,” Herman said. “We’ve done that and the cool thing is, we’re also just friends, which is nice. It’s always fun to hang out whether we’re talking business or not.”

Featured Image: Lora O’Shaughnessy with some of her creations. O’Shaughnessy has a passion for creating whimsical creatures that she sells through her online business, Egan Street Design. Image by: Paige Bruneman.