Voice of DentonDiversity is our voice
HomeEntertainment

Fear and terror are generally not emotions people look forward to feeling at a bar. However, a Wednesday night at Denton’s BackYard on Bell offers a unique experience with a different horror movie screening every month.

Erin Devany, a Denton resident and filmmaker at All Hallows Productions, created the Dreaming in Horror Film Club, which meets monthly at Backyard on Bell to explore the horror genre. Each meeting features a movie or short film, handpicked by Devany, and performances by a local band. Devany said the meetings help introduce the community to films they may not otherwise watch and bands they may not have known about.

“I just wanted to combine my love of film and music together and have an event where I can share and showcase both of those,” Devany said.

Devany started Dreaming In Horror Film Club back in September 2018. Initially, she intended for the club to be held at her house but her roommate, who works at Backyard on Bell, encouraged her to move the meetings to the bar and live music venue. Devany said she is thankful for both the support of her friends, who are willing to help out with “whatever crazy idea” she has, and for the help of BackYard on Bell in attracting more attention to Dreaming in Horror.

The club has shown a variety of horror films ranging from older classics to modern comedies and even foreign films. Devany has selected monthly movies including “The Green Room,” “Murder Party,” “Hereditary” and more.

“I think that my main goal with this film club is just to challenge people to watch horror films that they don’t know about,” Devany said. “I feel like the horror genre has been really narrowed down to super genre-specific stereotypes that people refuse to let go. While there is merit to the blood and guts and gore and the regular horror standards, it’s just not for everybody.”

Charlie DeBolt, a Denton musician and Devany’s boyfriend, has been involved with Dreaming in Horror from the start. DeBolt said the club began as a means to meet with friends but has since grown to accommodate a wider audience.

“We’ve noticed Denton community members we’ve never met begin to develop an interest [in the club,] which is cool to see a common interest build among people who are otherwise strangers,” DeBolt said.

Some people, such as Zachariah Walker, are longtime horror fans. Walker, the booking and production manager at BackYard on Bell, said Dreaming in Horror has introduced him to films he never really considered before.

“Erin is an encyclopedia of knowledge on film and [an] expert on horror,” Walker said. “It’s awesome to get to see all these movies that have flown under the radar and challenge what we expect a horror movie to be.” 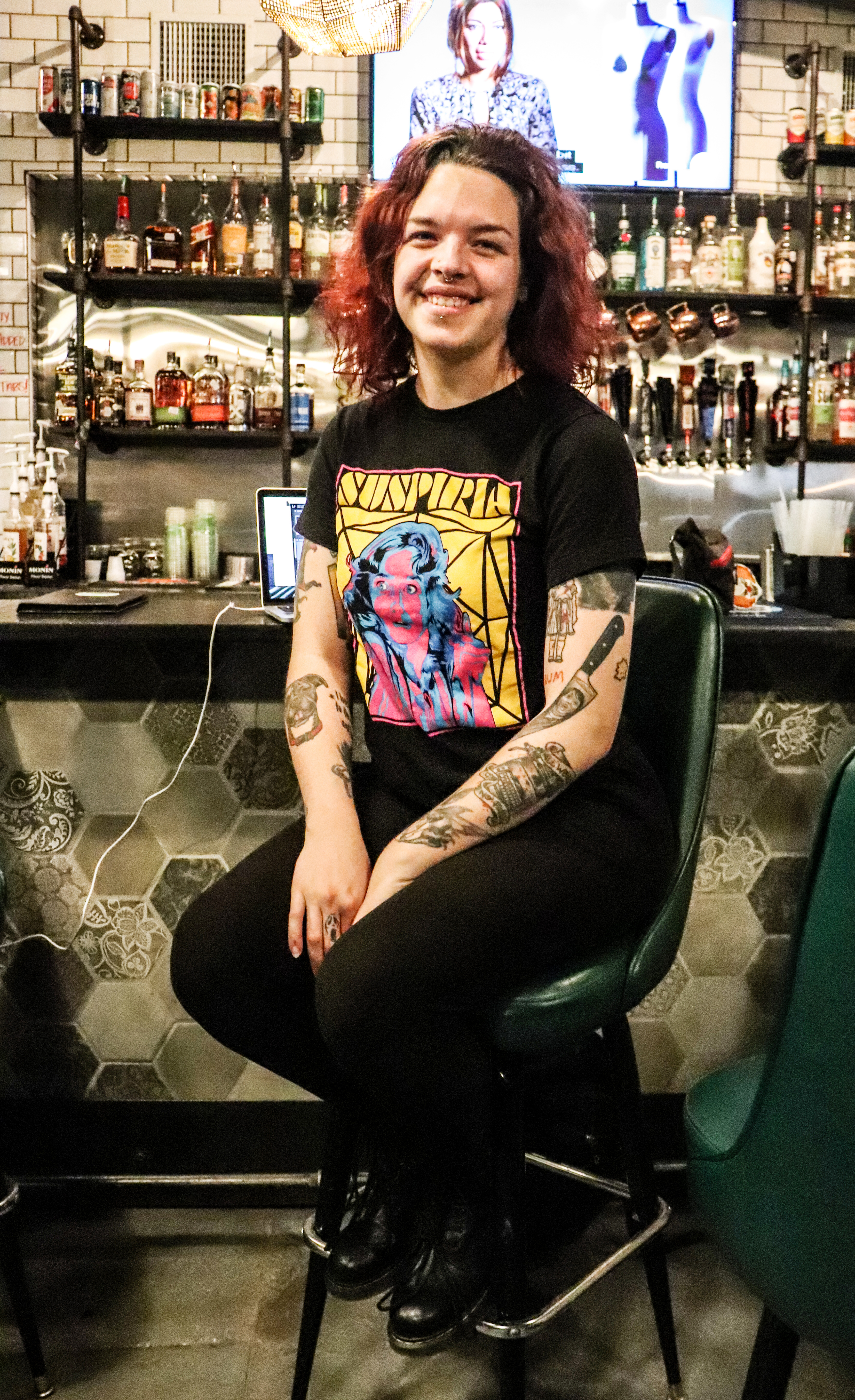 Erin Devany, creator of the Dreaming in Horror Film Club, sits on a barstool at BackYard on Bell. Image by: Yecenia Alvarado.

Other members of the club, Devany said, come for a drink and end up getting sucked into the movie. She said many of these people do not look like typical horror geeks but get interested in the film anyway.

“This couple sitting at the bar, maybe in their 40s, they look like your straight-up mom-and-dad couple, stayed and watched the whole [“Death Chasm” film,] demon worshipping and all,” Devany said.

Devany said she loves horror because it evokes a wide range of emotions.

“I get different takeaways from every horror movie that I see and that’s always been super exciting to me,” Devany said. “Special effects, the sound, the coloring, the lighting, it’s all very important to creating this formulaic genre that can be all sorts of things.”

Horror films, she said, often touch on subjects “other movies are terrified to.” She noted Jordan Peele’s “Get Out” as a prime example of social commentary. Movies based on fictional entities, like monsters and aliens, allow viewers to suspend their beliefs about what is real.

“Pennywise is a huge point of fear for everybody and he’s an alien creature from a book that came out 40 years ago,” Devany said. “People still are afraid of clowns to this day, just because of one book and one movie.”

Devany said Dreaming in Horror catalyzes not only a relationship with cinema but relationships between individuals as well. Last November, the club came together at Devany’s house after one of the bartenders at BackYard on Bell passed away.

“We had a bunch of people over that were in the midst of all that tragedy and it was nice to just have a living room full of people that you’re safe and comfortable with,” Devany said.

DeBolt said Dreaming In Horror meetings are also beneficial for the local music scene. Debolt performed with one of his metal music projects, Doomfall, following the screening of “Deathgasm,” which is fittingly about a metal band. He said the incorporation of punk, emo and metal music in horror films cultivates “a strong bond” between the music and cinema communities.

“The club has also helped me broaden my understanding of how music can pair with horror films and any film for that matter,” DeBolt said.

Devany said she hopes to continue to reach people in the Denton community who might not normally take interest in horror films. Hopefully, the arrival of a new theater will help her do just that. Denton’s historic Fine Arts Theater is purportedly opening in the Denton Square sometime next year. If that happens, Devany said she will try to combine efforts with the theater and partner up for future Dreaming in Horror meetings.

For now, Devany hopes her film club will continue inspiring people to broaden their cinematic horizons. She said she wants her monthly screenings to spark enough curiosity about the genre that people will start to pursue horror films on their own.

“Do something with your visual life and [with] what you watch that normally would make you uncomfortable and see what sort of boundaries you’re willing to push with yourself,” Devany said.

Ultimately though, Devany said Dreaming in Horror is mainly an outlet for her and a way to showcase to others the movie genre she adores.

“Horror means everything to me,” Devany said. “Getting to share it with the world like this is a pretty unique experience and I love it.”

The Dreaming in Horror Film Club meets every month. To find their next meeting date, visit their Facebook page.

Featured Image: Members of the Dreaming in Horror Film Club stand together at Backyard on Bell. Image by: Yecenia Alvarado.

TV and movie releases to look out for this summer