Shop ‘Til You Drop! Denton is home to a number of Etsy artisans offering unique local gifts for the holidays.

Red dresses are spread across campus for the Native...
Read more
Arts & Entertainment

Set up in front of LaRee Ruteshouser’s parents’ house is her art studio, where she is surrounded by different types of paint. LaRee uses the “hidden waterfall” method on her canvas, the colors slowly spreading out as she pours them. She tilts the canvas, getting rid of unwanted colors bit by bit. What eventually comes out is a unique mix of color on the canvas that LaRee adds to her diverse collection.

“I start painting and I kind of go into this weird little trance,” LaRee said. “Then I just fill the paint in. It shows in my videos [of painting] sometimes because my videos will start getting off-center.”

While LaRee has been making art her whole life, she began pour painting two years ago when her mother introduced her to the practice.

“I’m actually focusing more on the big picture, which is something that was really hard for me to get used to in the beginning,” LaRee said. “I was like ‘Oh my gosh, there’s one little white spot in the middle of the painting.’ But it doesn’t matter in the big picture. This form of art has let me explore a looser form of art.” 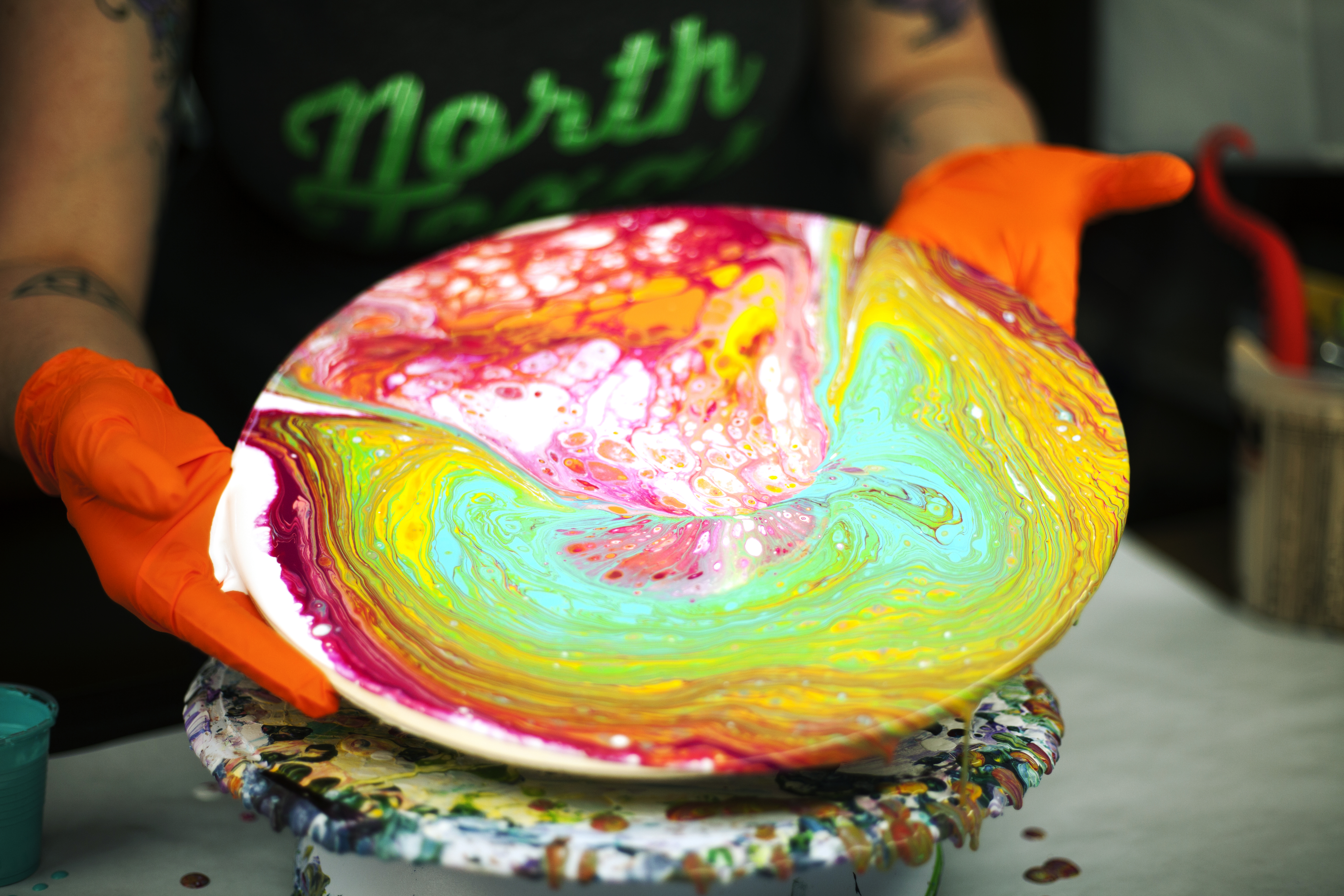 LaRee Ruteshouser has been pour painting for almost two years. Ruteshouser is in Ripley’s Believe It or Not for the most colors used in a paint pour. Image by: Cameron Roe.

LaRee starts by mixing her paints and deciding what colors to use as she goes. Pour painting is usually done with acrylic paint but she includes additives and said she enjoys experimenting with alcohol ink.

“[The pour painting] process is a lot more, to me, in-depth because it can go a very different way very quickly,” LaRee said. “A lot of it is experimenting with what chemicals are going to work together and what additives I want to use for different effects.”

LaRee enjoys pour painting as a way to relax and describes it as a freeing activity.

“It’s intuitive art,” LaRee said. “There’s a lot of connection with the paint. You kind of have to feel where it’s going to go, how it’s going to react with [anything].”

LaRee said before she starts painting, she does not always know what the piece will end up looking like. She uses different types of tools including silver leaf, a metallic silver paint, to create different patterns. Other utensils she uses include a flip cup and swirl pod.

“I wanted to see how [silver leaf] would look on the alcohol ink,” LaRee said. “This is more [for] when I’m by myself and kind of meditating.”

The process of pour painting, LaRee said, acts as a de-stressor and helps her in taking time to relax.

“It’s a very good outlet for me,” LaRee said. “My life is kind of stressful because I do have a full-time job, I have two kids and I work another part-time job outside of [painting]. Here, I can just let go with the paint.” 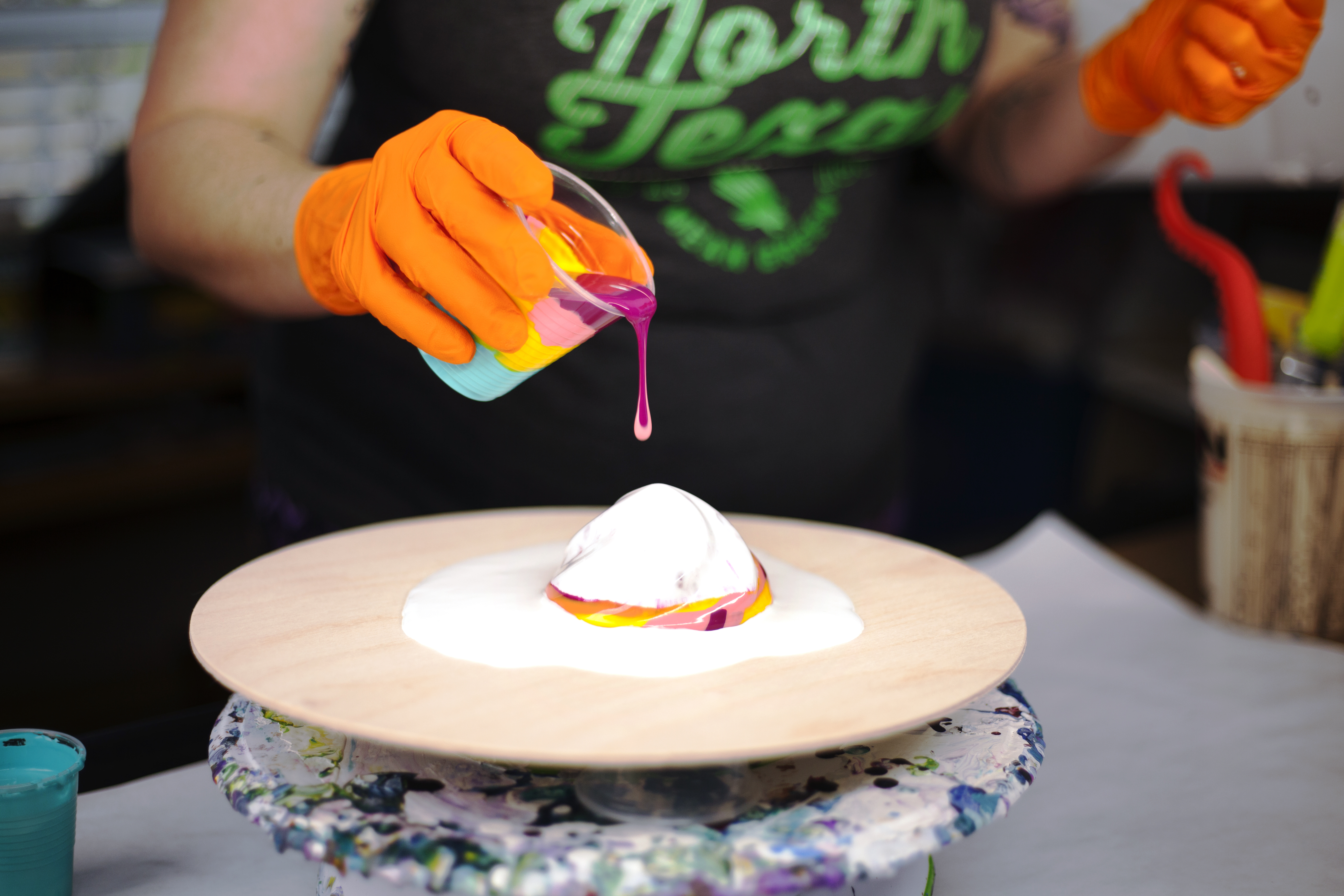 LaRee was introduced to the idea of pour painting by her mother while LaRee was on maternity leave. Image by: Cameron Roe.

LaRee’s art has been showcased on multiple platforms. She sells some of her art to collectors, but most of her painting is shown in videos her mother uploads to Facebook. She has also published a book and completed a challenge that was featured in “Ripley’s Believe It or Not” for the most colors used in a pour painting.

“It’s truly impressive, the ability social media has given LaRee to launch her work to such a large audience,” LaRee’s husband Sean Ruteshouser said. “She has fans all over the country and even overseas, too.”

Sean has known LaRee for four years. Both LaRee and Sean attended UNT, and LaRee said she also feels her art has changed since then.

“When I was at school at UNT, my artwork was very precise,” LaRee said. “In the year since I left UNT, it’s just become obviously much more fluid and loose. I can focus more on composition rather than just little details.”

LaRee has had art featured at Midway Craft House in Denton.

“LaRee is a good friend and her husband is on my staff,” Rahim Dewji, Midway’s manager and events coordinator, said. “I was aware they were both artists before he started working for us. He used to sometimes show me their work when he came by the shop.”

LaRee said she uses different techniques to make her paintings unique. She adds white so the end result will resemble biological cell patterns and tends to lean toward darker colors.

“When I first met her, she mostly did portrait sketches, fashion drawings and watercolors,” Sean said. “With her new style, it’s really taken on a life of its own.”