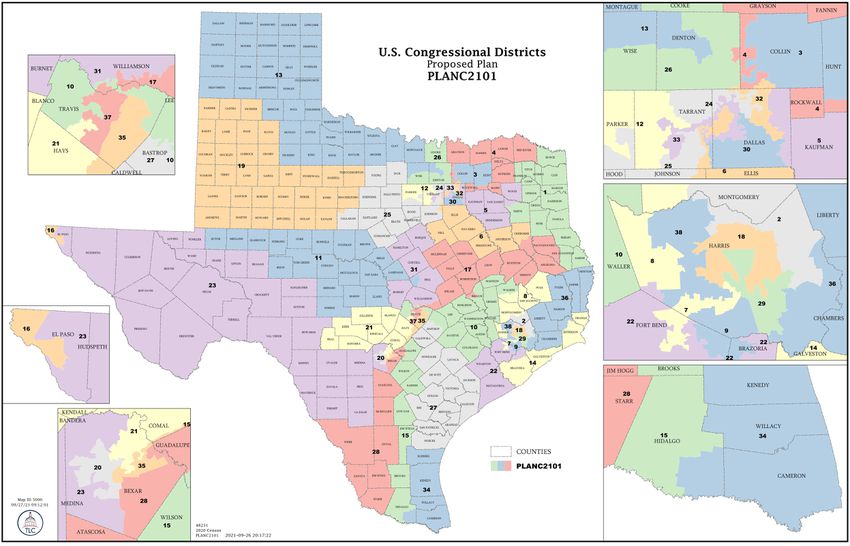 From the Dec. 2nd  “Friday Staff Reports to City Council”

Join us for the ribbon cutting of Denton's New...
Read more
Government

City of Denton facilities will be closed on Thursday,...
Read more
Government

From the Nov. 18th  “Friday Staff Reports to City Council”

From the Nov. 10th  “Friday Staff Reports to City Council”

Texas lawmakers on Monday released their first draft of a new congressional map that would largely protect incumbents while reducing the number of districts in which Black and Hispanic residents make up the majority of eligible voters. The map reduces the number of districts dominated by people of color even though Texas gained two additional congressional seats and the population of Asian, Black and Hispanic Texans outpaced white Texans over the last decade.

Republicans constructed the map with incumbent protection in mind — a strategy that focused on bolstering vulnerable GOP seats rather than aggressively adding new seats that could flip from blue to red. However, the map does in fact strengthen Republican positioning overall in Texas, going from 22 to 25 districts that would have voted for Donald Trump in 2020. The number of congressional districts that voted for Joe Biden would have shrunk by one, from 14 to 13.

While many incumbents appear safe in these maps, others were drawn into districts that overlap with one another — for example, the proposed map pits Houston Republican Rep. Dan Crenshaw against Democrat Rep. Sylvia Garcia. It also pits two Houston Democrats — Reps. Al Green and Sheila Jackson Lee — against each other.

Democrats, who have been out of power for decades, have attempted to make state elections more competitive but the redrawing of congressional maps gives the GOP an opportunity to lock in their advantage for another decade.

Texas’ current 36-seat congressional delegation is made up of 23 Republicans and 13 Democrats. Under the new map, Texas will have 38 congressional seats and 40 electoral votes in future presidential contests. The two new seats were drawn in Austin and Houston.

The redrawing of district maps is intended to reflect population growth captured by the latest census. People of color accounted for 95% of the state’s growth over the last decade, but in the new map there’s one less Hispanic majority district and zero districts with a Black majority. The latest census results show Hispanic Texans nearly match the number of white Texans.

Domingo Garcia, national president of the League of United Latin American Citizens was dismayed that Hispanics, who drove much of the state’s population increase over the decade, growing by nearly 2 million people, would have less opportunity to elect the candidates of their choice under the proposed map.

“This map is clearly gerrymandered by politicians to protect incumbents and totally discriminate against Hispanic voters,” he said. “LULAC has filed suit against the state of Texas every 10 years since 1970 and we’ve prevailed every 10 years. Unless there’s new maps drawn, we expect we will wind up in federal court again.”

“The proposed map vastly diminishes the voting strength of minorities all around the state by either packing them into districts already electing minority candidates of choice or cracking them by pushing them into districts dominated by conservative white voters,” he said. “As the state has garnered two new congressional seats on the backs of its minority population, it has sought to put forth a proposed congressional map that is clearly retrogressive.”

The maps were proposed by state Sen. Joan Huffman, R-Houston, who leads the chamber’s redistricting committee. This is only the first draft of the map, which is likely to change before it’s passed by the Texas Legislature and signed into law by Gov. Greg Abbott.

If approved, the proposed map would narrow the battlefield of competitive races for both Democrats and Republicans.

Based on 2020 presidential election results, there would have been only one district in the state — the 15th Congressional District in South Texas — with a margin between Biden and Trump voters of less than five points.

As a result, nearly all endangered incumbents on both sides of the aisle likely will have easier paths to reelection.

Texas members of the House GOP delegation were closely involved in the drawing process and approved the map last week, according to two sources close to the Texas delegation.

The most obvious exception to that is U.S. Rep. Vicente Gonzalez, who had a surprisingly close finish in 2020. His district, once a safe Democratic seat, now tilts in Republicans’ favor. But instead of a full-blown South Texas GOP offensive targeting two other neighboring Democratic districts, mapmakers bolstered Democratic voters in seats held by U.S. Rep. Henry Cuellar of Laredo and U.S. Rep. Filemon Vela of Brownsville — especially the seat of Vela, who is retiring — at the expense of Gonzalez. His 15th Congressional District flipped from a seat Biden carried to one where Trump would have narrowly won.

But the map was a relief to most other incumbents.

Democratic U.S. Rep. Colin Allred of Dallas surprised Republicans in 2018 when he was able to dislodge the once-safe Republican 32nd Congressional District. Instead of targeting him this time around, Republicans sought to bolster nearby Republicans by packing his district with Democrats and all but assuring a Democrat will hold his seat for years to come.

To his west, Republican U.S. Rep. Beth Van Duyne’s seat flipped from a district Biden carried by nearly 6 points in 2020 to what would have been a solid 12-point Trump district. In 2020, Democrats heavily targeted Van Duyne and several other Republican seats.

“That protects the Anglo incumbents like Van Duyne and Kay Granger whose districts were trending Democrat and have been fighting off Latino and Latina challengers,” he said.

The new map also packed more Trump voters into the 23rd Congressional District, currently held by Republican U.S. Rep. Tony Gonzales, who served in many cycles over the last 18 years as the only competitive U.S. House seat. The new version of that district would have seen Trump win by a seven-point margin, a sharp shift from a seat Hillary Clinton carried in 2016.

U.S. Rep. Lizzie Pannill Fletcher, a Houston Democrat, is likely to run in a revamped version of her 7th Congressional District. Like Allred, her 2018 victory was a surprise to Republicans. But instead of targeting her, they spread some of the Republican vote in her region to Republican incumbents.

The state picked up two seats in reapportionment and on the surface they appear to split between the two parties.

The new 37th Congressional District will consolidate central and west Austin, somewhat resembling a district longtime Democratic U.S. Rep. Lloyd Doggett held until Republicans dismantled it in 2003. It was not immediately clear whether he would run in that district or continue to serve in the 35th Congressional District, which stretches down to Bexar County. Back then, Republicans aimed to dilute the liberal Austin vote, split up into several congressional districts, several of which had otherwise rural populations. But as this decade wore on, the Austin liberal vote was so potent that otherwise safe Republicans had to fight hard for reelection.

Doggett condemned the proposal in a statement, adding that it’s too soon to make a personal decision about running over a draft of the map that is likely to change.

“Fearing voters, Republicans once again engage in extreme gerrymandering to carve up neighborhoods and communities of interest in Travis, Hays and Bexar Counties—aiming to dilute strong voices. With lines shaped like snakes, tentacles, and dragons, parts of both Travis and Bexar are included in five different districts. San Antonio and Austin are connected by a sliver only slightly wider than I-35,” he said.

The other new seat — the 38th Congressional District in west and northern Harris County — will likely be safe Republican territory.

This will be the first round of political mapmaking in Texas since the U.S. Supreme Court struck down provisions to protect voters of color from discrimination. Previously, states with long histories of voting discrimination, like Texas, had to receive approval from the federal government before making any changes to election laws or political maps.

But the Supreme Court essentially did away with that requirement in 2013, leaving no buffer for voters of color if lawmakers pass discriminatory maps.

Since the enactment of the Voting Rights Act in 1965, Texas has not made it through a single decade without a federal court admonishing it for violating federal protections for voters of color.

Patrick Svitek contributed to this report.

Previous article
Texas has a constitutional amendments election this year. The last day to register to vote is Oct. 4.
Next article
University officials address the use of the Eagle Alert emergency system