Hannah Williams, 23, holds up a small square canvas while painting. The design on the canvas resembles soft ocean waves gently creeping up a shoreline, painted using vibrant and intense colors. Each of the bubblegum pink and cobalt blue waves are lined with tiny, circular mounds of fabric paint.

“This [painting] in particular has taken about five hours to complete,” Williams said. “My biggest piece took 100 hours.”

Williams, who goes by Hannah Amazon for her art business, is a nanny from The Colony who created Hannah Amazon Art about two years ago. She specializes in dot painting and spends between 20 and 30 hours a week on her art business. Williams discovered her passion for art when she was in first grade. She said she learned about Vincent Van Gogh in school and was instantly inspired to recreate his work so she went home, taped pieces of computer paper together and drew “Starry Night.” 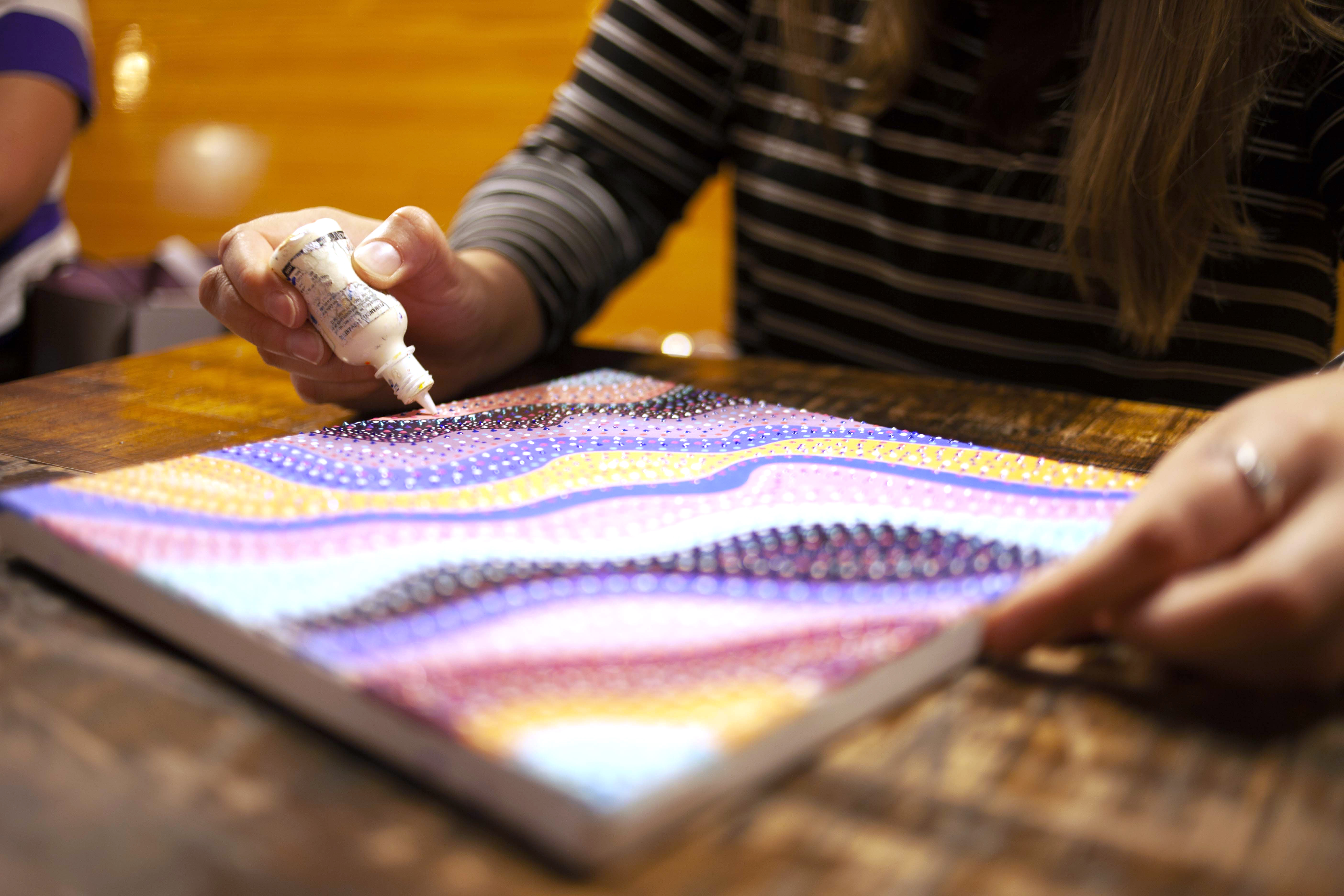 Denton-based artist Hanna Williams paints small white dots along the curves in one of her paintings. Image by: Isabel Anes.

“My mom will say to this day, that’s when she knew I was creative and I was driven by art,” Williams said. “I have always been super inspired by Van Gogh’s work and I think a lot of my art reflects that, just the colors and the blending and stuff.”

Williams then took art classes throughout middle and high school, where she learned how to draw and paint. It was not until two years ago though, when she decided to turn her passion into a business.

“I was 20, living in Denton and at a job that I really, really hated,” Williams said. “I found all my stuff at my mom’s house from high school art and I was like, ‘OK, this is what I’m supposed to do.’”

Williams’ mother, Lee Kilborn, played a major role in getting Williams to start Hannah Amazon Art and purchase a Denton Community Market membership. Kilborn, the senior director of event production at the National Multiple Sclerosis Society, said she raised Williams to be fearless and to pursue her passions even in the presence of “what-ifs.”

“Even if you lose, you’ve lost nothing, but there’s so much to gain,” Kilborn said. “There is nothing to gain from not trying.”

Williams said she began experimenting with fabric paint to make dot artwork and it has since become her signature style. She still draws inspiration from Van Gogh, as well as Andy Warhol and Mike Hammer, but she said she also finds music inspiring. She said listening to artists like Chance the Rapper and Tame Impala helps her internalize musical rhythms and translate them into her work.

“A lot of my work is rhythmic so it’s music-based,” Williams said. “I listen to a lot of music and I just kind of go with it and see where I lean.”

In addition to creating, Williams also organizes and hosts art events in the community, using her creative platform to fundraise for charitable causes. 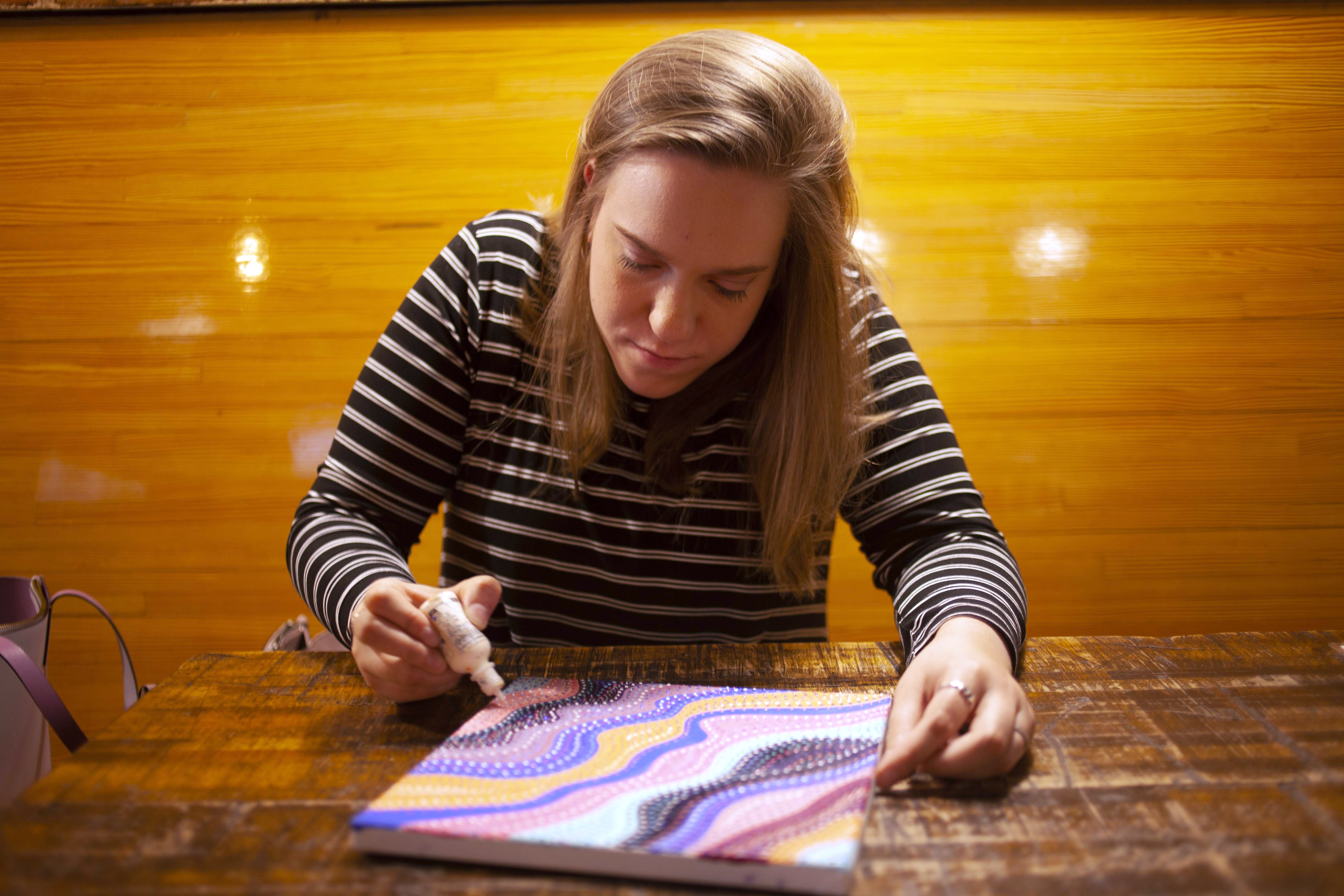 Denton-based artist Hannah Willams continues working on one of her paintings, applying small white dots along the curves of the base paint. Image by: Isabel Anes.

Within the past two years, Williams has been featured in art shows across Dallas and Fort Worth. In Denton, she held three shows at Milpa Kitchen & Cantina, with the first two being art shows she ran with her business partner, finger painter Haris Feratovic. Williams’ most recent show was a market that benefitted the National Multiple Sclerosis Society. Williams’ mother was diagnosed with multiple sclerosis 19 years ago. Her mother also works for the National Multiple Sclerosis Society so Williams said it has always been a cause that is “close to her heart.”

Williams put together A Milpa Market for MS on March 30, which featured a variety of local artists and vendors and raised about $600 for the National Multiple Sclerosis Society. Kilborn said Williams has always been a part of the volunteering and fundraising community since attending her first MS walk when she was four. Kilborn said she is proud of her daughter for gathering her art community around a cause so important to the family.

“[Williams has] seen what the fundraising has done for the MS community, providing more options for medications, more treatment options and bringing new neurologists in,” Kilborn said. “She’s seen the benefits from it.”

Candice Mcenturff, an artist from The Colony and operator of Candy’s Paint ‘n’ Sip, was also a part of the Milpa Market. Williams and Mcenturff met when Mcenturff was looking for someone to do an art show with and she said Williams was “all in.” Mcenturff said she was thoroughly impressed with how the MS event unfolded.

“We’re bringing attention to something that affects people’s everyday lives and trying to help them in any way we can,” Mcenturff said. 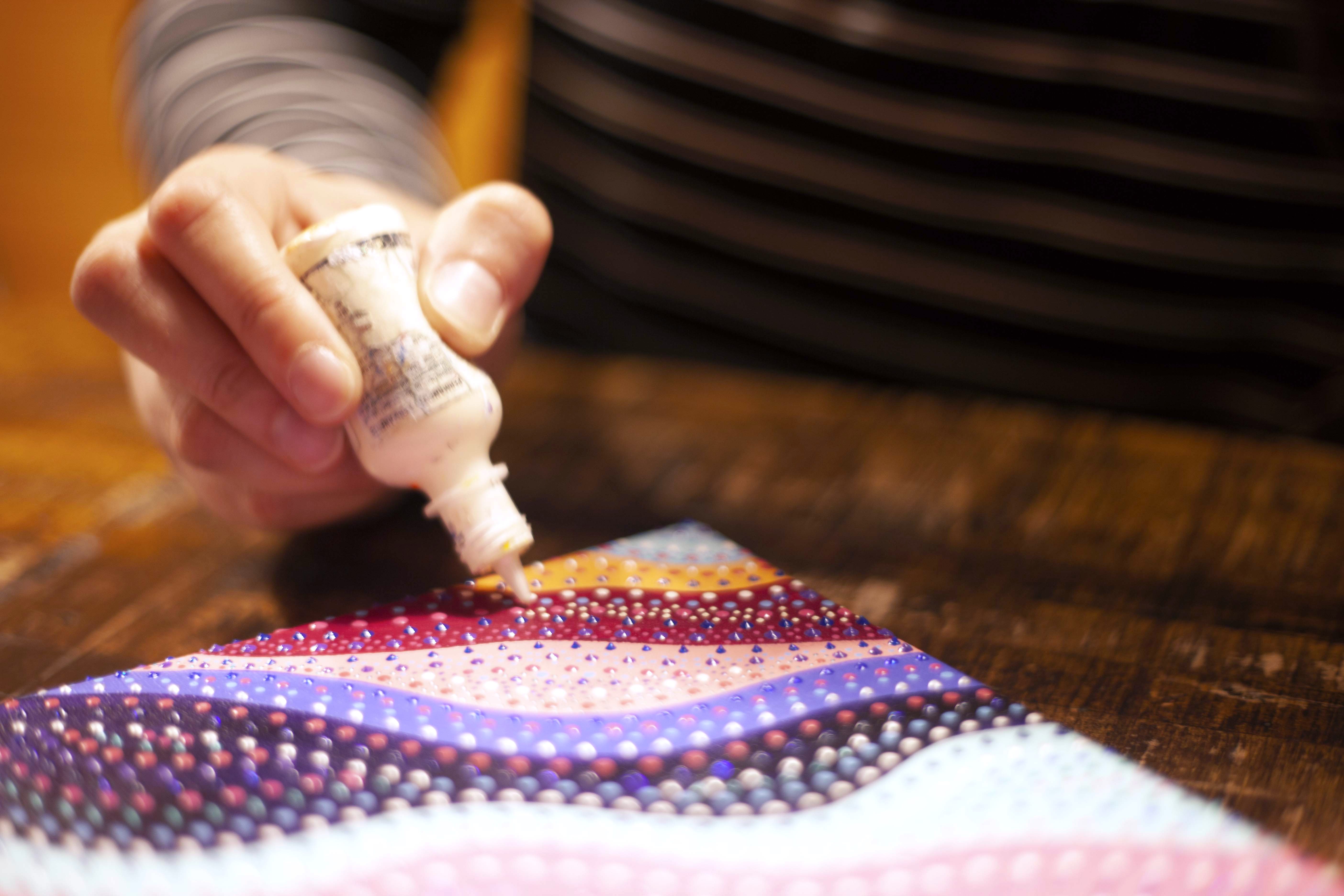 Williams paints white dots along the curves of the base paint of one of her pieces. Image by: Isabel Anes.

While reigniting her passion for art has been a fulfilling venture, Williams said the business side of Hannah Amazon Art has posed its own set of challenges. Prior to the business, she never had to keep up with bookings and plan events. She said the most difficult thing about starting out is being told, “No.” She was once turned down from a show because she did not have enough Instagram followers.

Williams said doing commissions can also be taxing, as she is more accustomed to painting whatever she feels like painting on her own time. With commissions, she said she has to work with deadlines and create pieces based on other customers’ requests.

“It can get super stressful when you’re having to do so many pieces,” Williams said. “I want to put feeling into each and every one, [but] you can’t do 100% of that all the time.”

Though business upkeep and event planning have come with a steep learning curve, Williams said that all of the work has been worth it because of the community connections she has made. She said she loves bringing joy to others through her art and seeing the look people’s faces when they buy something.

Williams’ work can be found at hannahamazonart.com.

Featured Image: Hannah Williams, a Denton-based artist and dot painter, created “A Milpa Market for MS,” an event which consisted of 15 local artists who came together to raise money for families affected by multiple sclerosis. Image by: Isabel Anes.