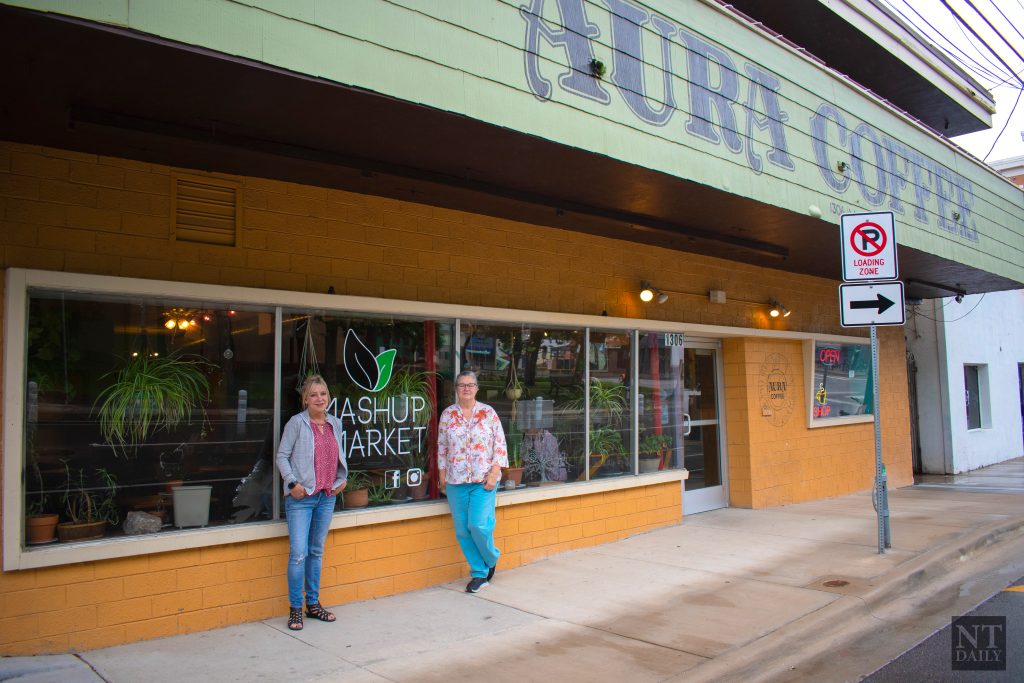 A group of diners gather around the kitchen as...
Read more
Business

Eligible businesses must be able to demonstrate an economic...
Read more
Business

With the cost of living on the rise, more...
Read more
Business

More than 80 vendors and nonprofits were set up...
Read more
Business

Whether it is the atmosphere or the convenience, food...
Read more
Business

For the past eight years, Elizabeth Hassett has been...
Read more
Business

Taste of North Texas unites community over local cuisine, cause

Local coffee shop Aura Coffee re-opened its doors last week with big changes, including a new business partner that sells plant-based products. Mashup Market will now be offering its products in a set-up booth that is located on the left area of Aura Coffee.

Aura Coffee closed its shop indefinitely at the end of last year after the pandemic led to a financial strain on the business.

“It was terribly emotional for me and for my staff,” Aura Coffee owner Kim McKibben said. “We closed at Christmas because there was just not enough business with the university being virtual and [all] that kind of stuff, for me to make enough money to pay my staff.”

After receiving a second Payment Protection Program loan, there was enough funding to re-open Aura Coffee this summer. McKibben says she began to receive support that pushed her to begin the process of re-opening.

“When all my folks wanted to come back I was just flabbergasted, but they did,” McKibben said. “They were all willing to come back, so all of my staff came back.”

While Aura was closed to the public, McKibben monitored the Centers for Disease Control and Prevention guidelines for updates on re-opening, but she did not feel ready to open until she could guarantee the safety of her staff.

“Now they are all vaccinated so I don’t worry so much about them,” McKibben said. “But you know the people that come in and out, I think it is really important to let them feel safe about being in here.”

Some renovations include new air conditioning ducts and getting a freshly-painted ceiling. To increase the distance between customers, McKibben decided to reduce the amount of seating available in the shop.

“We started looking for someone to share the space with us because we were going to have reduced seatings and we would have an option to do that,” McKibben said. “We interviewed two or three companies and then Cherie showed up.”

Mashup Market owner Cherie Reed brings and sells plant-based products from independent vendors that people would not regularly have access to in local grocery stores. By having multiple plant-based products in a single location, Reed hopes to create what she described as a “Spiral Diner experience” for the customers.

She wanted to increase her sales and considered the possibility of renting in a location closer to UNT. With the university near her business, Reed made it a priority to offer healthy and on-the-go meal options for students.

With the help of a friend, Reed began looking for spaces to rent in proximity to UNT. She came across the sub-leasing of Aura Coffee through a mutual contact from her friend.

“Once I realized it was a coffee shop and the location, I was like, ‘There just isn’t a better collaborative effort that I can imagine,’” Reed said. “Because we will be serving sort of breakfast items, grab-and-go-stuff and it just goes very naturally hand in hand with coffee.”

Reed is in the process of setting her booth up in Aura Coffee and will be stocking her area with more products.

“[Customers] can expect refrigerated and dry goods, again all plant-based,” Reed said. “We do have a huge selection of frozen products that we will not be offering at this location in short term, longer-term most likely. However, they can get anything from the other store transported over here at no cost for pickup.”

Denton resident Tanner Godwin is a pre-COVID customer who came to the re-opening event when he found out Aura Coffee was open again. Godwin described Mashup Market as a “cool” addition to Aura Coffee.

“While growing up my family was, they were business owners so to support local businesses is something that I always like to do,” Godwin said.

McKibben hopes that when UNT students and Denton residents visit Aura Coffee, the word of mouth will begin to spread and bring more customers to the shop.

More information about the location’s reopening can be found on Aura Coffee’s Instagram, @auracoffeedtx.